A DECADE ago, Derek Moran – one fifth of a popular boyband D-Side- blagged his way into a screen test for a children’s TV presenting job.

“A friend of mine said there’s this TV audition tomorrow for Milkshake,” he recalls, his enthusiastic Irish accent unmistakable to anyone with a child under six.

“And I was like what’s Milkshake, you know? So, I just phoned up. They asked me if I had a show reel and I said it was on VHS – which was a little white lie. And they said, ‘oh alright just come in tomorrow and screen test.’

“So, I went in the next day, which was Friday and they put me on the TV on the Monday. It was scary. But it was great.” END_OF_DOCUMENT_TOKEN_TO_BE_REPLACED

Ahead of my phone call with Lulu I have been pre-warned she’s been “rather poorly” and won’t be able to speak for long, as her voice must not be “over-exerted”. 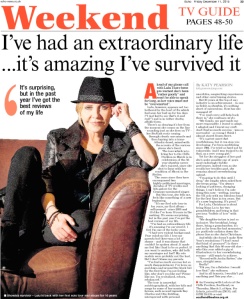 Lulu, however, appears not too bothered by the bout of flu which had seen her laid up for ten days (“I just had to say that’s it and rest!”) and is in rather chatty, affable form.

There’s no denying it’s her from the moment she comes on the line – sounding just as she does on TV – her Scottish roots coming through clearly one minute and then lapsing into a trans-Atlantic drawl, mixed with the accents of the various places she’s lived.

The tour which is to bring her to the Cliffs Pavilion in March is in celebration of the 50-year showbiz career she’s enjoyed, since she shot to fame with her rendition of Shout in the Sixties.

The years since then have encompassed two highly-publicised marriages, decades of TV credits and hits galore for the Grammy-nominated singer.

But this tour, she tells me, feels like something of a new beginning.

END_OF_DOCUMENT_TOKEN_TO_BE_REPLACED

When your little boy just seems to know that you need a cuddle... #mummyslittleman #myheart #beststarttotheday #sonnyjim #mamasboy #mysonshine
Because where else are you gonna go when you have three magazines on deadline and a preschooler with a cold who hasn’t slept for three nights?! Thank goodness for @cornerclublos (just a standard thursday evening hey @phoebparry 😘) 🥂 #werkwerkwerk #leighonsea . . . . . . #repost @phoebparry ・・・ HQ 👩‍💻
When you are knee-deep in deadlines and #lifemin, and your three-year-old has a cough and you basically need to sleep for a month and/or drink an entire vat of Prosecco... but then these pictures from last week’s #wheresmyhappyending launch with the amazeballs @mother_pukka and @papa_pukka flash up and it makes you smile... #parentingtheshitoutoflife #mumlife #seriouslytho
Time stands still best in moments that look suspiciously like ordinary life... #family #mysonandmynephew #allthecuddles #somanysmiles
When a seal comes to say hello to you and your grandad ❤️❤️ #mysonandmydad #SonnyJim #family #grandadandgrandson #beachdays #winterbeachdays #essex #leighonsea #leighbeach
Gonna confess I’m pretty chuffed with all three of my February editions (all out later this week!) My exclusive interview with #oxshott’s @louiseredknapp is @surreylivingmag’s cover story. @essexlivingmag has an amazing 34-page wedding section (yes new columnist @abigailscollection’s @abineill I *am* looking at you!) and @sussexprestigemag has the low down on THIRTY TWO must-visit restaurants in #Sussex (I’d quite like to disappear off for a spa stay now or something, but y’know March deadlines... and then there’s the small matter of an #inspirationalessexmums special 🤪) #magazinecovers #magazine #mamaisajournalist #magazineeditor #werkwerkwerk