Stockings have become synonymous with suggestive style. Here’s how hose went from chaste to racy… 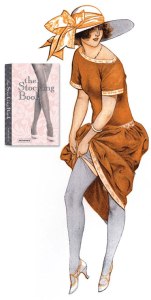 Knitted stockings (of cotton and wool and sometimes silk) were worn by both men and women until long trousers became the choice de rigueur for chaps in the 18th century. It was at this time that stockings came to be thought of as exclusively for women.

Throughout the puritanical Victorian era even seeing a glimpse of bare leg was “enough to bring on a touch of the vapours,” writes Sarah Roberts in The Stocking Book. A lady, quite simply, would never been seen in public without her stockings (though her stockings would never actually be seen). Indeed Ambrose Bierce in 1850 described a garter as “an elastic band intended to keep a woman from coming out of her stockings and desolating the country.”

But following World War I attitudes changed – none more so than to legs and their coverings.

‘During the 1920s, beige, skin coloured and pastel coloured stockings were in fashion,’ explains Roberts. ‘Feet, ankles and calve were on display. And during Prohibition in America, ladies used to tuck hip flasks of alcohol into their garters.’

‘Over 72,000 pairs were sold on the first day alone,’ reveals Roberts. Indeed 64 million pairs were sold in the first year. ‘Throughout the 1940s and 1950s women wore stockings fashioned to the shape of their legs. As nylon did not stretch, stockings had to be produced in different sizes.’

Lycra (which is able to stretch to seven times it original length without breaking) was only invented in 1959.

But more hosiery changes were on the horizon. Bare legs started to become acceptable in the 1960s and the arrival of the mini skirt meant tights became increasingly popular

‘By the 1970s sales tights had overtaken those of stockings,’ says Roberts. ‘Tights remained popular throughout the 70s, 80s and early 90s, until 1995 when sales began to fall. This was attributed to the fashion for bare legs. By 2006 leggings and footless tights had become a more popular alternative, and stockings were largely relegated to the intimacy of the bedroom.’

This site uses Akismet to reduce spam. Learn how your comment data is processed.

𝐿𝒾𝓋𝒾𝓃𝑔 𝐿𝑜𝓋𝑒𝓈 𝐿𝑜𝒸𝒶𝓁
I love how very proud he is of his paint job on his mud kitchen. He picked the paint (though I’m loving it was @frenchicpaint blush pink!!) and I left him to just get on with it. Yes he got paint EVERYWHERE. Yes, half of it was still on him this morning (in your ear babe? How??) But it’s so worth a paint splattered garden to see that look of achievement glowing from his little face ❤️ #sonnyjim #fromwheremummystands #mummandsonny #letthembe
Aaaaaannd that’s my April magazines out and looking a bit amazing... @essexlivingmag @hertslivingmag @sussexprestigemag
I think my Sonny Jim had a pretty good birthday. Despite lockdown. And the fact that two days after he turned five he was self isolating. Again. But he couldn’t be more loved. And I couldn’t be more proud of the little boy who stole my heart five years ago... ❤️ #happybirthdaybaby
The sunshine around which my whole world revolves. My sweet-hearted little boy. My absolute reason for everything. Tomorrow you will wake up a five-year-old. Which, as you say, “is pretty big, you know”. You will never know how much I love you, Sonny Jim. Yes, I gave you life... but really, you gave me mine ❤️ #mummyandsonny #amotherslove
Castles in the air ☀️❤️